A Message Regarding Coronavirus (COVID-19)

Individual numbers and emails on the Home/Contact Us and Meet the Team tabs.

Tyler has worked at the Davenport Hotel in their laundry department since 2009. Tyler is an awesome young man with a passion for music and sports. Tyler works with our newest Employment Consultant Mike Glenn, and had worked with Ty Lingo for 7 years.
Mike explains that Tyler is very popular downtown, and that shows within the Davenport, as well as when he goes to the bus plaza after work to get home. Tyler always has a smile on his face and loves to give people high fives and fist bumps. Tyler’s coworkers love to have him around, and he never forgets a name. It is amazing the type of memory Tyler has, he can remember just about anything that is told to him. Tyler is always the one making new friends, and engaging in conversation.Fun fact: Mike says Tyler keeps up with every NFL team in the league, and they talk a lot of football when they’re working together. Tyler’s favorite team is the Denver Broncos… But we don’t hold that against him 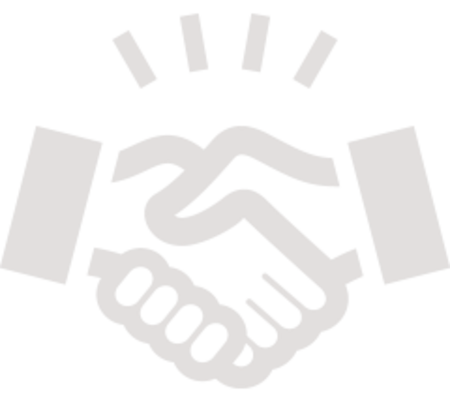 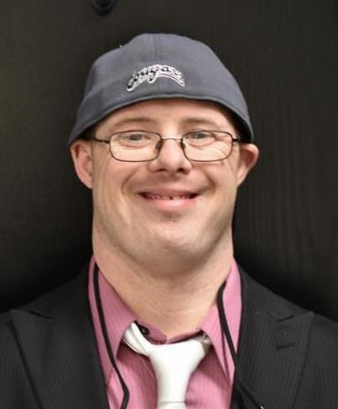 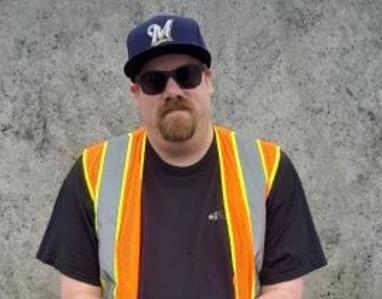 After graduating from the Spokane Public Schools Secondary Transition Education Program (STEP) in May of 2018, Malik gained employment at Glover Middle School as a cafeteria attendant. Malik has worked at Glover for 15 hours a week over the past two years as part of an unpaid internship through Spokane Public Schools. His responsibilities include preparing food for breakfast and lunch services, helping serve around 600 students each and every day, then cleaning the kitchen and cafeteria to get ready to do it all again the next day.
Business Development Consultant, Troy Marshall, commented that Malik is one of the most positive people he’s had the pleasure of working with. He said Malik has a smile that will light up a room, and a contagious attitude to match. Troy has also commented on Malik’s willingness to do whatever is asked of him by his supervisors and coworkers and how well he gets along well with everyone he meets.
This wasn’t an easy journey and required much work and collaboration between several agencies; it’s an honor to be a part of Malik’s story. We are so excited for Malik and incredibly proud of all he has accomplished.

Tony is a tremendous individual that has worked at the Shadle McDonald's as a Lobby Attendant since July of 2015. He’s been with Ability since Spring 2016. Employment Consultant Mike Glenn explains that, “Tony is one of the most focused individuals I work with, and when he starts doing his job it would take a tornado to get him off track”. Tony’s tasks include wiping down tables, taking out the trash, and sweeping the floor in the main lobby and play area. He also stocks items around the soda machine and cleans the bathrooms. After completing these tasks, it is usually time for Tony to return home. Tony is an avid Seahawks fan, enjoys WWE, and loves to lift weights in his free time (his specialty is dumbbell curls!). Everyone at McDonald's loves Tony and are very supportive and appreciative of him. Employment Consultant Mike states that, “People are always complimenting Tony on how well the lobby looks, he is a true difference maker”. Tony has consistently been a shining star, and the future looks very bright for him! 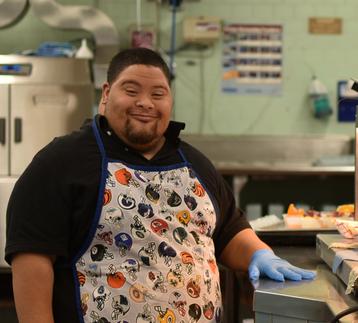 Jessica Curbow has been working with our Business Development Consultant, Troy Marshall since August 2017. Jessica works for Eastern Washington University’s Dining Services, with whom she’s been employed for three years. When she started, she worked at Swoops until the PUB remodel, and now works at The Roost. Moving to a new venue is a huge learning curve for anyone, but Jessica rolled with the changes and is assuccessful as ever. Her responsibilities include: calling out order numbers, delivering Tapingo orders, cleaning the restaurant, sanitizing tables, stocking utensils and napkins; and prepping condiment stations. This Spring she’ll begin training in the kitchen. Jessica works approximately 25 hours a week, and is such a stellar employee, she’s scheduled even when school is out of session.
Jessica’s manager Cheri Hayes told us they call her the “Rock star of the Roost” and complimented her incredible attention to detail and positive personality. We are so proud of you, Jessica. Keep being the rock star you are! 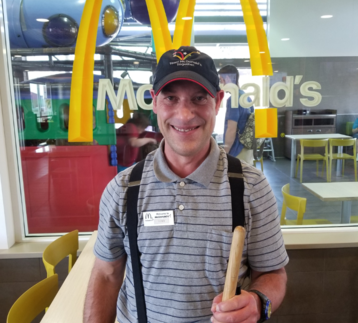 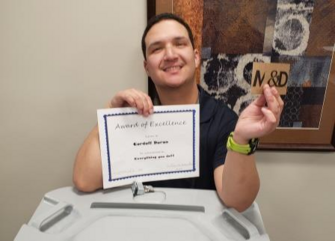 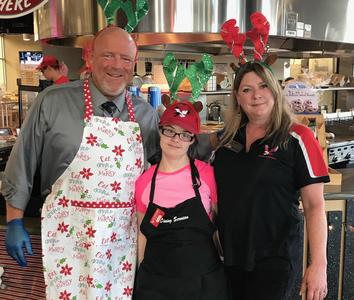 Cory began employment with Capaul Stone Works in March 2019 and has done such an amazing job that they have cancelled their weekend cleaning services. He has also been given new areas to clean because of the great job he is doing. 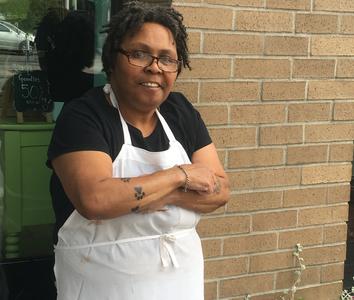 Linda  has been with Ability Employment Services since we opened in April 2016. She was originally Cameron’s client and has worked with Hannah since October 2016. Linda currently works at Sweet Frostings Bakery in Downtown Spokane, where she’s been since March of 2017, this was her first time changing employers in 12 years! Linda’s coworkers say she’s “awesome to have around” and is “very cheerful”! Their favorite times with her include singing and dancing in the back of the shop.  When she started in March, Linda was working six hours a week and has worked her way up to 25 hours per week, after just five months of employment. In August Linda was recognized by management for her hard work and positive attitude.

Kayla has been with us since May 2016, she worked with Cameron Stewart for a couple months, but has been with Cathy Eylar since August 2016. What a journey it’s been for Kayla! When she first came to us, she wanted to focus on school so she could complete her AA before looking for employment. She graduated in June 2017 from Spokane Community College from their Professional Baking Department with a certificate in artisan breads and special occasion cakes. She spent the last four months of college dealing with a severe foot injury and spent the five months after that in recovery and rehabilitation from surgery.
The good news? Just one month after she was back on her feet, and ready to start job hunting, she found employment! One month! She began working at the Yokes on Argonne in November, and in December received her very first pay check ever! She consistently works 20 hours a week, and her Employment Consultant Cathy couldn’t have better things to say. Congratulations, Kayla!

Want to be featured? Ask your Employment Consultant how. 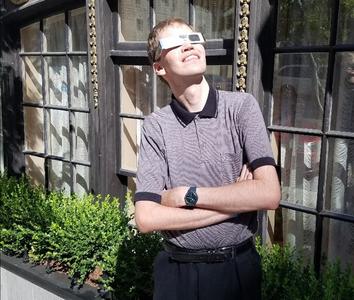 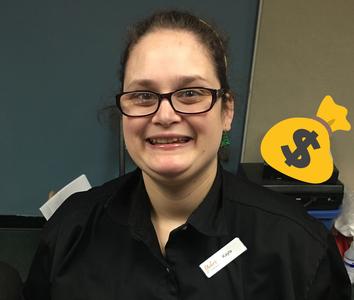 Cordell received an Award of Excellence and a gift card from the Spokane Branch Department of North West Farm Credit Services. 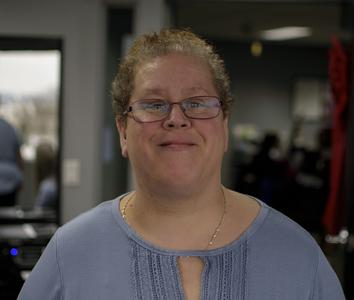 Ramona has been working with Ability Employment Services and our Senior Employment Consultant, Cathy Eylar, since October 2016. Ramona is employed at Northern Quest Resort and Casino in the River’s Edge Buffet as a Steward. She has held the position for eight years, and Cathy has coached her for six of those eight years. Her responsibilities include pulling and running dishes off the HUGE dish machine, hand washing large pots and pans, sorting and organizing silverware, and other back of house duties as assigned. Ramona is always a pleasure to be around! She’s personable, outgoing, upbeat and has a way of making everyone she is around feel welcome. Cathy complimented Ramona’s ability to adapt to change; she works in a fast paced and ever changing environment, and has adjusted to these changes with ease. Ramona works 25+ hours a week and is consistently on time and reliable. We’re pretty sure she’s never called out from a shift.

Chad has been sprucing up the lobby of Taco Bell since November of 2012. He was also one of the first clients with Ability when we first opened doors in Spring of 2016.  His coach Brea talked about how, “Chad is always giving customer’s a smile and willing to help clean up spills and messes without hesitation. He is enthusiastic and proud to be working at Taco Bell”. His manager Ryan stated, “Chad does a great job here, but when one of his coaches are present, he puffs up even more with excitement and determination”. Chad’s tasks include wiping down tables, windows, taking out the trash, and sweeping the floor in the lobby and walkways. Chad refills the drink station and those favorite little hot/mild sauce packs that are always looking so neat (thanks Chad!). After his shift, it never fails that Chad will be at the register ordering food (possibly the whole menu) for all his friends and roommates at home. His mom raved about how Chad’s heart is so big, and he is always full of life and gratitude for all his friends and family in his life. Chad is always on the go, watching his favorite sports teams: Gonzaga, Seahawks, and Mariners. If he isn’t watching sports, he is playing on his bowling team, seeing friends at the Arc of Spokane or you may catch him in a play at the Spokane Civic Theater. We admire all of Chad’s efforts in his position and career and we are thankful to be apart of the journey alongside him.